Spiritual Loneliness: A Meandering Journey Through The Unpredictable

As a young child, I had a deep devotion to God. Growing up in Milan, Italy, I was ardently devout—with all the passion of my innocent heart and the formidable power of a fantastical, unrestrained imagination. In the magnificence of the ancient Italian cathedrals, in front of their gilded altars, I prayed to Jesus and Mother Mary. I prayed to God. But I could never, although I tried in earnest, pray to the Holy Spirit because it felt to me like an add-on, an afterthought that was too vague for me to grab onto and truly feel impassioned about.

God the Father, Mother Mary, and Jesus were for me the perfect trio. At home, I used to draw a row of daisies in my notebook, trying my best to make each petal equal in shape and thickness. For each good deed of the day, each act of obedience, kindness, and service, I would fill one petal with a different color until each bloom was complete.

I called those daisies fioretti­­ (“little flowers”), and offered them to Mother Mary each Sunday as proof of my devotion to her. While Jesus was always present, with his sky-blue eyes and long blond curls, three fingers raised in the sign of benediction, I wanted the Mother most of all because she looked sweet, comforting, and safe. I could tell her anything, and was sure she always listened and understood me. 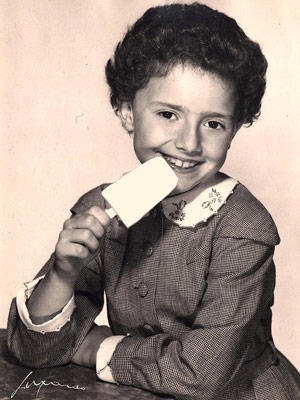 Portrait of the author as a child

But by the time I reached puberty, my innocence had been mutilated. A priest, who was supposed to be mentoring me in the Latin language, began to make sexually inappropriate innuendos. He then blamed me—a 12 year old­—for tempting him because I was wearing a sleeveless dress in the heat of mid-August. That experience threw me into a state of spiritual confusion and emotional malaise. Was it because I was bad and dirty? But why would this be so? I didn’t know what I could have done wrong by wearing the summer dress my mother had sown for me.

It was a devastating betrayal that plummeted me into a state of desolation, of profound spiritual aloneness. I remember running through the Sacristy, down the flight of stairs into the restroom in the basement where I washed my face over and over until my cheek were ruby red from the scrubbing and the fury I felt inside.

That was it for me. I had been a naïve fool for believing anything that religion, priests, or nuns had ever told me. All the moral precepts—the dogmas, the faith in God, the story about the virginity of Mary, the infallibility of the Pope, the Sacraments—all of it was a hypocritical ruse.

I hardened myself, becoming a radical intellectual, a political activist fighting for the poor and underprivileged, and remained a staunch atheist for over fifteen years. Religion, or any aspect of spirituality, was for me “the opium of the people,” deeply worthy of derision and an attitude of smug superiority.

Until, that is, I was brought to my knees by an event so painful that it cracked me open with a direct experience of spirituality so vivid it was impossible to deny.

Cover photo: Tiziana DellaRovere as a child in Italy.

If this article has been helpful, please sign up to receive Tiziana's latest blog posts delivered directly to your email.

Sign up to receive Tiziana's latest blog posts delivered directly to your email.